From the northernmost bar in the world, to the southernmost - the longest road trip ever made by a sports car.

Last week, Pub2Pub Adventure’s inaugural event took place – a 14-car convoy from England to the Eagle’s Nest, in deepest Bavaria.  As our first ever organised event, the learning curve was steep and the challenges big, but we’re delighted to announce that all 14 cars made it to Bavaria and back, and their plucky crews all returned to the UK with smiles on their faces, and memories which will last a lifetime.

So, what memories are these in particular?  Well, obviously every participant takes something different from a trip like this, so each person’s favourite moments will likely differ.  However, here’s our list of what we consider to be the top ten Eagle Rally memories, in no particular order:

Every story needs a beginning.  While the Eagle Rally story could be considered to have begun years before when we were wondering how to follow up the Pub2Pub Expedition, the rally’s ‘real-life’ beginnings happened on a sunny Saturday at Neil Garner’s yearly open day.  Around 100 TVRs were present, with many other fine machines also making the trip to bask in the last of the summer sun, making for quite an impressive event.

And in the midst of that event, at 11:30am, the organisers waved a union jack and our convoy surged out onto the roads, V8s roaring and straight-6s singing.  We were underway, with the Eagle’s Nest in our sights…

This was quite a coup – Pub2Pub had never organised a drive-in before, and we’d decided to aim big with this one.  Think around 50 cars, a manor house, buffet lunch, and even an appearance from the new TVR Griffith, and much of TVR Engineering’s top brass.  As the first pit-stop on the trip, it was definitely a special moment.  Stickers were applied to the cars, beers distributed, impressive metal admired, and the last of the summer sun soaked up, before the evening dash to the ferryport.

One of the great things about both Pub2Pub, and the TVR brand, is that they bring people together.  Over the past year, as we’ve watched Pub2Pub grow, and become ever more intertwined with TVR, doors have opened to friendships and experiences which we couldn’t have otherwise made happen.  Sunday lunch near Brussels, which was organised for us by the good folk from the Belgian TVR Car Club, was a case in point.  The carpark dazzled, the food was great, the air filled with talk of motors and adventure.  And after lunch, we entertained all those present with a talk on the adventure which had started this whole affair – the Pub2Pub Expedition.

Predictably, we were running late as we hit the road for the afternoon’s drive, but it was worth it for the shared experience with like-minded enthusiasts.

4) Convoying along the snaking tarmac of Luxembourg and the Ardennes

After the ironed-smooth landscapes of northern Belgium, the first ripples on the horizon which marked our entry into the Ardennes were most welcome.  The roads responded to the intrusion, sweeping left and right in deference to the terrain, plunging along river valleys, and sometimes hairpinning their way uphill from village to village.  This part of the world is relatively unsung when it comes to driving roads, but rest assured, the lack of hype didn’t equate to a lack of quality – the smooth tarmac spoke for itself.

5) Taking in the ‘Technik’ museums of Sinsheim and Speyer 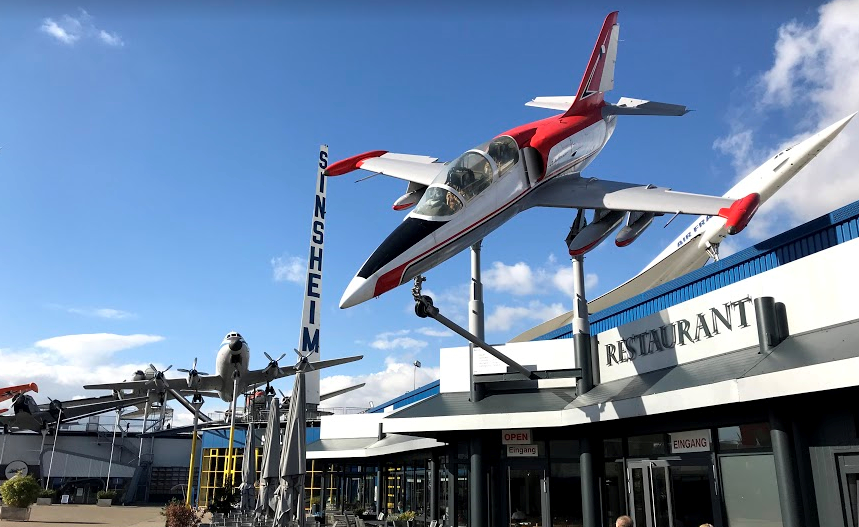 When you rock up to a museum and it has both a Concorde, and a Soviet TU-144 ‘Concordski’ strapped to the roof, you know you’re in for something special.  And when you hear that the sister museum just up the road has a Soviet ‘Buran’ space Shuttle and a U-boat, you have a decent afternoon in the making.  And those headline-grabbers are just the tip of the iceberg of what Monday on the rally offered.  Between them, the museums also housed Europe’s larges collection of F1 cars, the Blue Steel land speed record car, 27 locomotives, an iMax cinema, 50 more aircraft, and a load more classic cars, tanks, motorbikes and other engineering goodies. Not a bad day, if you’re into that sort of thing…

6) Bantering our way through the Porsche Museum, Stuttgart 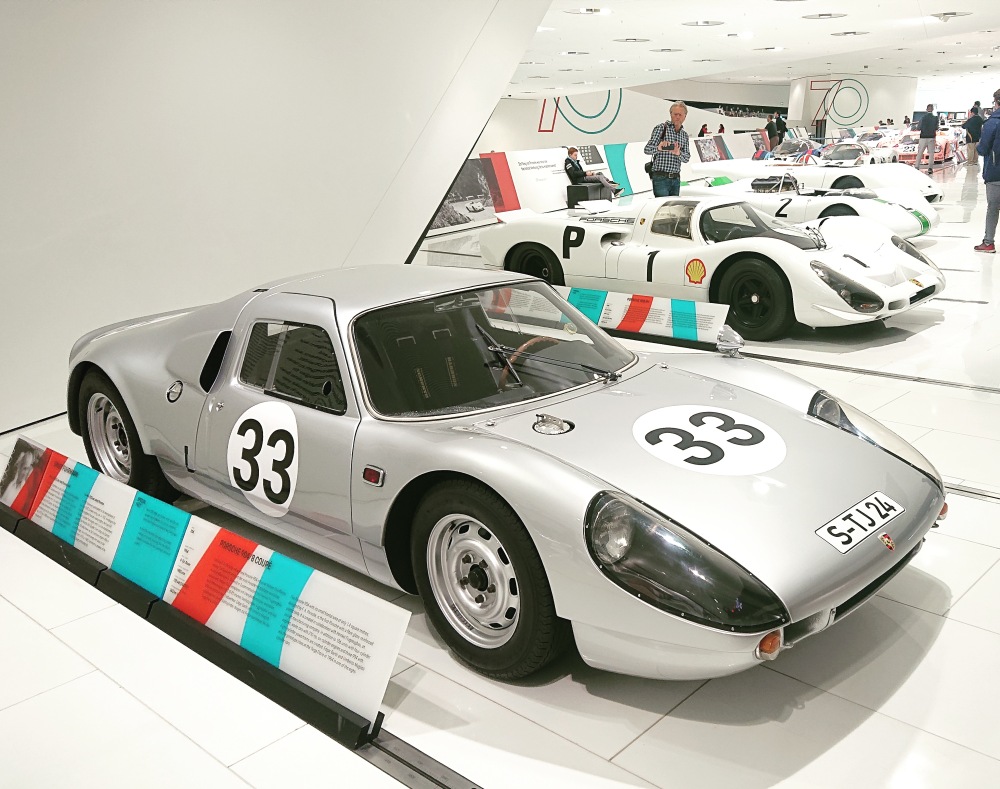 Take a feisty bunch of TVR owners, mix in a few folk more partial to pork, and take them to that lodestar of German engineering – the Porsche Museum, in Stuttgart.  What could possibly go wrong?  As it happens, nothing.  The banter and joking flowed freely as we wandered the clinical halls of Porsche’s past, and the art and engineering on display was enjoyed by all – even if a significant proportion of the group were loathe to admit it at the time.

This 280-mile sweep of tarmac stretches from the shores of Lake Constance almost all the way to the Eagle’s Nest.  And it packs a lot into its miles – lush alpine meadows, snow-clad mountains, dense forests, chocolate-box villages and glorious lakeshores.  We spent two days traversing the road in its entirety, always on perfect twisting tarmac, generally without much in the way of other traffic, and often with a hangover.

And as ways to spend a few days go, driving this route in a charismatic sports car isn’t easy to top.

8) Savouring a morning beer in the ‘Wank-Haus’

Halfway along the Alpenstrasse, there is a mountain over a mile high.  A cable car takes you to the summit, where a restaurant awaits, ready to trigger the titillation of any less-than-mature English speaker.  For this is Mount Wank, and the restaurant, which commands stunning views across an alpine vista, is the legendary ‘Wank-Haus’.

Just occasionally, maturity is overrated.  This was one of those occasions… 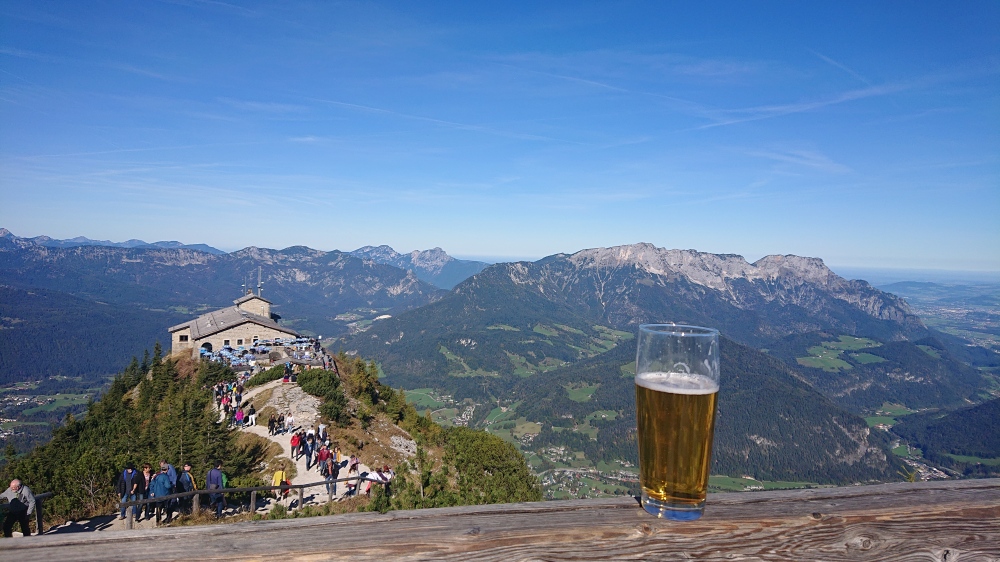 We’d driven for 1,300 miles since leaving our starting point in England.  We’d covered many hundreds of miles of twisty roads, visited 6 different countries, partied the nights away with glorious determination, created friendships and memories and finally, after 6 days on the road, we’d reached our goal.  Hitler’s mountain stronghold, on a rocky summit which towers over deepest Bavaria.

They say that beer tastes best when it’s been earned, and by that measure, this was one of the best beers we’ll ever have, because of everything we’d achieved in the journey to the bar which served it.

When it comes to adventures, there’s a saying which goes something along the lines of ‘if nothing goes wrong, then everything has gone wrong’.  And given that this first running of the Eagle Rally represented our first step on the steep learning curve of organised road trips, it’s inevitable that something wouldn’t go quite according to plan.  However, often, it’s these accidental moments which form the gloriously random memories which stay with you for long afterward.

For us, everything seemed to go wrong around the hotel we booked near Wurzburg, on the drive home.  On paper, it seemed an ideal choice – a well rated place with clean rooms, a restaurant and a bar, in which to break up the long haul home.  In reality, the restaurant and bar turned out to not exist, forcing us to down a few beers in the neighbouring service station – not exactly what we’d planned, but fortunately we had such a fun group of people on the trip, that the sheer comic randomness of the evening will live on in the annals of the Eagle Rally for years to come.

Oh, and no, we’re not planning on laying on a similar experience for the 2019 rally…

So there you have it.  It’s not been easy to cut down such an intense week into only ten stand-out moments, and many of our ralliers’ experiences have had to be left out – exploring the historic town of Trier, lapping the Nürburgring, the fantastic driving roads of the Mosel Valley, the Unesco-protected ironworks of Volklingen, that night out in Oberau, grabbing lunch in the gorgeous town of Cochem, Driving the ‘Panorama Strasse’, having the entire convoy pulled over by Bavaria’s police, pummelling tunnels with the sound of a dozen sports exhausts…. and most of all, coming together on the trip as strangers, and leaving as firm friends.

Yep, it was quite the week…

Sign-up to the 2019 Eagle Rally will open later in October – if you’re tempted, watch this space.